A little about the owner: John Davis 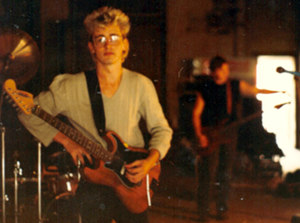 So you’re a guitar Geek! We know you are ’cause you’re here aren’tcha? Ahuh! Sprung! Well, since you’ve gotten this far, maybe we should tell you a little about what we do…

I’m John, a Brisbane Luthier and the proud owner of The Guitar Repairers. I made my first solid body electric guitar as a woodwork project back when I was a just a boy.

We left-handed kids were always disadvantaged compared to you little right handed brats; the motivation for my first foray into luthiery was one of need, rather than the unforeseen and infinite fountain of untapped riches that you will see before you today.

Throughout my twenties I gigged both full time and part time. I played this right hand / left hand Hendrix inspired monster (see picture) in the vain hope that the spirit of the almighty would imbue my body and mind thus transforming my rather geekish appearance and playing style into that of a golden god.

During this time I also found an irresistible urge to buy all that was old and cool. Badges, lamps, furniture.. oh! and guitars. Lots of guitars!

So, fast-forward, the year is 2001. After 12 years working selling and repairing guitars I thought it was time to get the ‘freak’ out and create the shop that I had always dreamed of owning. I knew there had to be others whom were lets say “Unique” in their taste and appreciation of beautifully restored instruments from some of the golden eras of music.

I have been very lucky and very much humbled by the talent and passion of my lads, each one an amazing Brisbane luthier in their own right: Luke, James and young Andre. This passion can be seen in our work.

Our oldest guitar is dated 1870 and we have everything in between. Our mission is to restore, preserve and improve where we can. 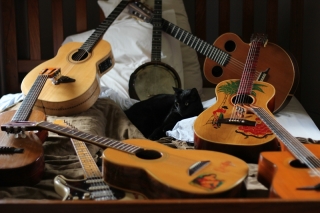 All guitar players have their favourite guitar right? However once a guitar player gets the fever (GAS “guitar acquisition syndrome”) which is very much like “BAS” for you banjo nuts and “MAS” for you mandolin geeks, there is no complete cure.

Save that of the wrath and shame bought upon them from a partner who can see “other” more important things to spend money on. You married folks know what I’m talking about. What could be more important than guitars I ask you? These “other” folks are just misguided aren’t they?

To this end I give you the “Staff” guitars. There’s a story behind all of them, so we hope you enjoy. 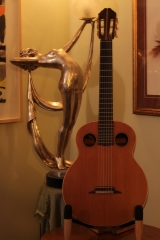 This was a gift from Doug’s family following his passing in 2003. We were also honoured to have been gifted his tools and timber (Thank you Sally and Julian).

Doug made made this guitar as his ultimate swan song. As Doug reached into his eighties his hands and eyes were starting to show signs of old age which reflected little by little in the quality of work in his guitars.

Always the innovator this girl incorporated experimental bracing and proves that a conventional sound hole is not always a given to create volume and tone. Speaking of tone, the sound is somewhere between jazz and classical.

This is my favourite acoustic guitar and she gets played every day! 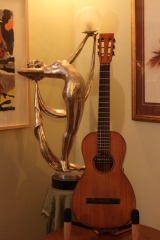 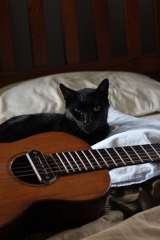 If you read the “Rave” interview you already know the history of this guitar. I love to gig with this as firstly, she’s sooo light you almost don’t need a strap!

This is also my travel guitar, she’s been everywhere with me…Hong Kong, in hot and humid summer, Beejing, in -22 Celcius, America and all around Australia. There’s a huge split in the back and the bridge is staying on by god knows what. However it’s not seen the repair bench in all those years since it was restored.

You’ll notice that she sports a “Charlie Christian” style acoustic pick up which allows me to overdrive the old girl. The tone is absolutely killer, both acoustically or amplified.

Just a small aside…..When I play with Mr. Dave Love, my duo partner, folks always compliment him on his Beautiful Walnut topped Ovation, whilst me on the other hand am plainly viewed as a poor boy who can’t afford a new, shiny guitar…..Infidels! 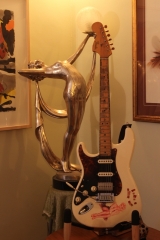 When you’re a leftie you tend to buy everything and anything that’s left handed (is it true fellow lefties?). Over the years I’ve had Strats, Teles, Gretschs’, Ricki’s, Gibsons’ and so on and so on.

However no matter how many times I’ve strayed I always come back to my old girl. Unlike so many things in life, she’s never let me down in spite of my transgressions with other guitars. The White lady is an amalgam of the first two “proper” left hand Fender’s I ever bought.

Fact is they were the first Fenders I’d ever bought! let alone left handed ones.

Anyways, I loved the neck on one and the tone of the other so one afternoon (2 hrs before stage time in fact) I swapped them, and careful inspection will reveal the chisel marks I inflicted to get the sucker to fit..

Remember these are my guitars so I tend to be a bit more “relaxed” with the quality control. Anyways, here we are twenty years, one thousand plus gigs and three re frets later. The results speak for themselves…isn’t she beautiful? 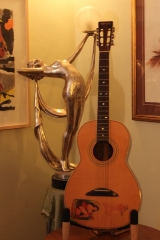 In 1994 This model was headed for the dustbin. It is now obvious (in hindsight) to see that Samick were well ahead of acoustic guitar trends (maybe a little too ahead me thinks).

I did in fact buy this guitar from the distributor who cleared them for $300.00 a piece. Lucky little moi, didn’t just buy one but got an absolute pearl. When I’m playing with friends, its like having a guitar that goes to 11!

That said, Catherine (the wifey) and I moved house about 18 months ago and I only took the poor old thing out of it’s case two weeks ago…bad John! Bad John! 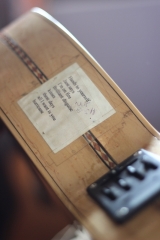 Brisbane Luthier Doug Foster made this guitar for my 36th birthday. You can see it’s been gigged by the cheat sheet of standards on the side.

I then had Doug make me a matching classical guitar, which in a moment of foolish generosity I lent to someone to use at a Conservatorium audition. By the time I realized she hadn’t been returned it I’d forgotten who I’d loaned it to Doh!

$500 bucks for its return folks! PS. Let that be a lesson to you youngsters. Don’t smoke the devil’s lettuce! 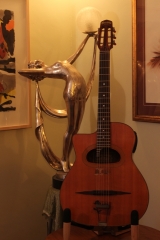 Macaferri’s look way cool don’t they? This poor little warhorse has been the test bed for soooo many pick up systems it just not funny.

My dear duo partner Mr. Dave Love used to look at me with dread every time I’d turn up to a gig with my latest incarnation in order to road test it in a “live” setting.

I still love the old girl, however these days she only has to hang around and look cool in the lounge room with the other art deco bits and bobs.

Now I would be remiss (and be in the S#!T) if I didn’t include my beautiful wife Catherine’s instruments. 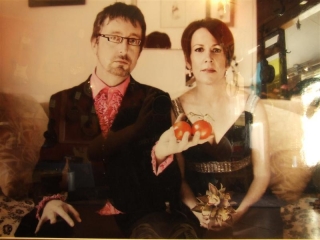 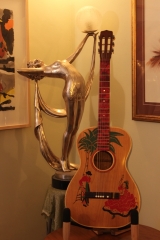 I remember Cath being very thrilled when she saw this guitar in the shop just after it arrived. The biggest hurdle we had was how to remove and re adhere the red mother of pearl fingerboard.

Well the skill and patience of Luke came to the rescue and I was able to present it to my wife on Christmas day last year.  This guitar sounds amazing, as do most of the old Harmony’s we restore. 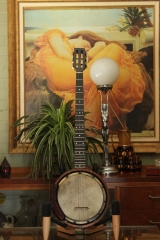 Catherine loves Americana folk and that’s one of the reasons I married her. Gillian and Dave are the god and goddess (Gillian Welsh and Dave Rawlings to you non believers) of our house, so the need for a ye old worlde banjo (or Bianjiolo) as Cath likes to call them was a given.

We are presently working on some Tom Waits songs and this year I am sure that we’ll get some Gillian and Dave action happening… OH! I forgot to tell you about the banjo. I bought this old girl off another old girl whose granddad was a vaudevillian in merry old blighty in the early 1900’s….so there!