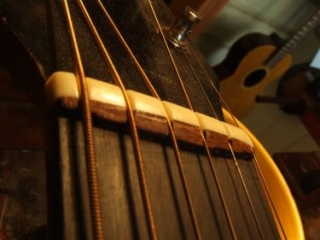 Ever driven yourself insane trying to get the open chords of your guitar to all play in tune and then once you’ve found an acceptable compromise you find the bar chord suck ass?

Well this can help. When you look at your guitar, do you notice that the bridge saddle/s are further away from the neck on the bass side and closer to the neck on the treble side?

This is called compensation and it is designed to compensate for the thickness of the strings so that they are as close to being a perfect octave at the 12th fret. The 1000,000.00 question is how do you get them to be in perfect pitch over the rest of the finger board?

Answer. You can’t, OR you can if you intend having individually calibrated frets for each string (that’s roughly 132 mini fret lengths). And that isn’t easy to do, although I really would love to try one day. Now having said this, I would be remiss if I didn’t point out that a little bit of dissonance is not a bad thing in any musical instrument, because without dissonance you would not have tone (wanna know more? Please ask).

Now back to the compensated nut. It works in the same way as the bridge saddle/s, only it does it from the other end. Now there has been an upsurge of interest in this type the nut mainly through the marketing of several companies claiming to have virtually invented it themselves.

Sorry fellas, no disrespect but luthiers going back as far as the 17th century were applying the same idea to gut stringed instruments. Musicman and ESP also have this concept on many of their guitars.

The nut is especially useful for those folks who like to use a capo and also you metal heads who love nothing more than a guitar tuned down to B. The average price of this modification is 75.00 and for many it will be money well spent.